The custom in these parts...a look back.

It's a been a bit of while since my last post. The previous month has been a bit of a crap-fest.
I could belabour you all with tales of woe and post-modern angst, but who here among us does not bear such stuff.

Suffice it to say it was all crap, and then our dog died. 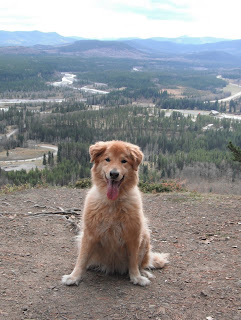 Nugget. 1997-2010
Nugget, our brave and relentless companion on the snowshoe and running trails, slipped from us fast and peaceful. We miss her. Strangely, it has messed up my painting. Creatures of habit that we were would go for a late night run and do an easy 3-5K. We'd come home, she'd curl up, I'd make tea and do an hour of slapping paint on lead. Now that has changed.

Just lately I've been back putting brush in paint and making the little men dance. Always good to have a project and a deadline isn't it? So I created one...

King of Canadian Tyre
The wonderful Don Ray and I bumped heads on a Fanaticus discussion on the hows of making a I/35 Cypriot and Phoenician army. See the gripping discussion here (I whine most pathetically) :
http://www.fanaticus.org/discussion/showthread.php?t=10492

Well it's begun. I'll be posting more in a separate article for those who want to see more of the project. Suffice to say..they'll be more Faux-necians than anything, but it will be grand.

Notches on the Paint Brush
2010 was pretty light in the production end. I did complete a Mongol Conquest army and another Early Samurai army. Both these were for my FallCon production of Samurai Night Fever. Pictures? Yeah, got lots, just need to make up the galleries. Soon I promise.


I struggled with my Early Muslim and North Africa and Sicily army. I finally slammed it through last week. All praise to the dip.


Still working on the 28mm Warring States project. Lots of wonderful figs to paint there. But sheesh, I've squat for time for all the projects on the queue, the hordes of Zhao and Chu get stuck on the hold.


Liam the Pre-Teen Visigoth and I finished up the Evil Emo Elf Empire for HoTT 28mm. They've yet to take the field but their monster supported bladey goodness will be most fun.


I goofed around painting some Super-hero sorts. Making up lame-ish supers is a favourite game around here. The Pre-Teen Visigoth and I are working a project for HoTT that will have such amazing heroes like NINJALICIOUS, THE VISOR, and KING  KONGBAT doing battle with SANDTRAP, THE BLUE MEANIE, and THE 42ND STREET NINJAS. Pictures to come.


Distractions
2010 has been more about music for than minis. Well, that and finding a decent job. I'm back and school learning digital audio and studio recording. I love it and spend way too much time 'twidding knobs' then painting.

We all know the cycle of distraction grief we gamers get into. We get bored with big project so find something else to do. Then we get annoyed that we aren't getting done what we need to so we go back to our big project, out of duty and not passion. Boredom follows...

I've been in a huge reading storm too. I even read a book on WW2

. GASP. Those of you who know me know of my half-hearted contempt of wargaming most of everything post 19th Century. So yeah, broadening out. Plus I think I have learnt everything I REALLY need to know about Merovingian jock straps and Chandragupta's tent flaps.

And I do like Russian tanks.
I do promise to get over my BT-7 fixation. Soon...But just watch this video.


How can you not love these tanks? Even the cute blond chick digs them and the guy at the end was totally stoked.


2011 projects.
Well for DBA it's all about Book One for the first half of the year.  Lykians, Phoenicians, Egyptians of all flavours, more Indians, and Early Macedonians are all ready to get pigmentized.

Don't take my 'I hate 20th Century stuff' too seriously. The Spanish Civil War still grips me. Admittedly more for the music than anything else right now. But a few of us are indeed actually co-operating on this project. Watch for micilianos!

Of course, the joke was I started this blog just after New Years. Took me that long to finish it up.

Good painting and good times for 2011.

I leave you with Lila Downs...

The Republic may have lost, but they had the best music.
Posted by Teenage Visigoth at 13:34 2 comments: