I Was A Teenage Ashigaru

No new stuff to report.
Have Samurai and the like on my mind. Working on my next Early Samurai force which will have a fairly substantial warrior monk presence. Why? I have lots of figures and I think they are cool. More on Early Samurai, later.
I came across this link whilst dredging through the vasty deeps of youtube.
http://www.youtube.com/watch?v=iv-8vY3iCc4&feature=related

This is the movie 'Heaven and Earth

' or 'Ten To Chi' in which I was employed for the summer as an extra. The film was shot on the Stoney First Nations Reserve which lies between Calgary and the mountains to the west. It's the story we all know and love, Battle of Kawanakajima, Uesugi Kenshin, and Takeda Shingen.
For the summer I stood around in red plastic armour baking in the sun and dust. Occasionally we'd run around or engage in mock fights. But mostly we just stood around.
This does not make me a re-enactor as some people have told me. Extras get paid to run around in costumes. Re-enactors pay money to run around in costumes.
This does make me foremost authority of on Samurai warfare on my block, quite possibly neighborhood.
Have fun and watch. It's quite fun, and you can see me! I'm one of the guys in red running away from Kenshin's 70 Kilo-Mifunes* cavalry charge through the red Takeda ashigaru ranks.
Made today it would have countless herky-jerky CGI puppets fighting it out with extra choppy editing. I feel like I was in one of the last of the 'cast of a thousand' epics.
DBA wise all I'm pointing out is how cool the singular massed colours of the uniforms look. Maybe not historically accurate, but dramatic for sure. I'm doing another Post-Mongol Samurai force this spring and black and white are the colours of the season for sure!
Until then, keep your ashigaru away from the cavalry in the open.
-Sean
* You may or may not be aware that the 'Mifune' is the scientifically agreed unit of measurement of cinematic samurai badassadry. One Mifune (MF) is a single eyebrow raise by the actor Toshiro Mifune in 'Yojimbo

ranks as 1.6 Mega-Mifunes. The dune sequence in 'Shogun Assassin

Thanks all for encouragement and swell comments. I've yet to really figure out where I'm going with this project, so thanks for bearing with me.
A quick surprise battle report for you today.
The Pre-Teen Visigoth and I held a impromptu scrap Sunday morning while The Hippy slept in.
The Pre-Teen Visigoth's been playing DBA for three years now and has learned quite a bit. He tells me it's quite like Pokemon, which makes sense to me. Squirtle is good against Charmander, but not against Bulbasaur. If ya get my drift, it applies to DBA mechanics quite well.
Currently he's taken with Greek armies. Which is gratifying. Better than those Roman jerks.
Here's the Archon of Souvlakia with his Greek Cavalry and Hoplites. 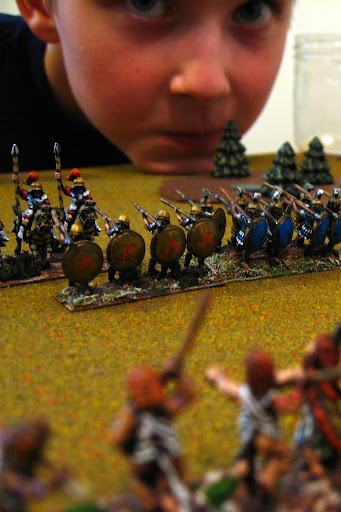 Allegedly he was playing Later Hoplite Greek Athens (II/5b) but had slipped in a Cavalry General and a second Psiloi in place of the Auxilia. Whatever. I'm sure the Gamer Police have be notified.
Defending the Colony of Magna Dolmadnia in North Africa he faced down the wily Great Chief Fel-al-Fal and his Early Libyans I/7b. 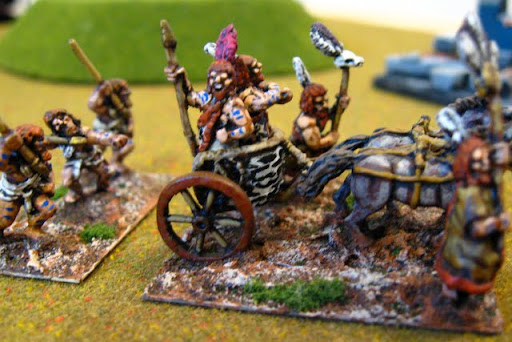 Why Great Chief? Cool chariot and great smile of course!
Given the suicidal aggression of the Early Libyans I was the unsurprising attacker.
Great Chief Fel-al-Fal had serious plans for the Greek turf he was over-running. 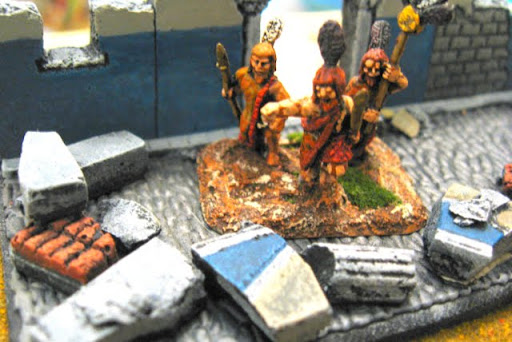 "We'll put the pool table here."
I coached the Archon into deploying in columns in order to move out of the rough on his deployment side and spread out his battleline once he cleared it. Of course he was hampered by low pips and my solid advice was questioned. 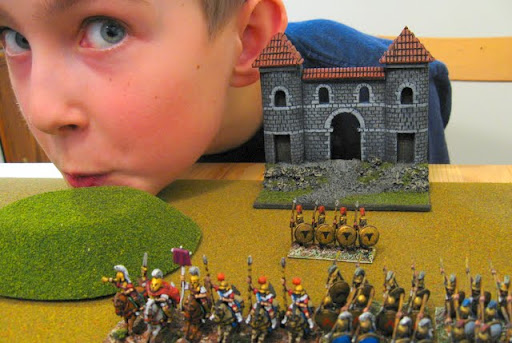 He did at least leave a reserve.
I set the Libyans up in a fairly straight forward line formation. Warband in the centre, Psiloi on the right flank, Bows and the General attacking on the left. 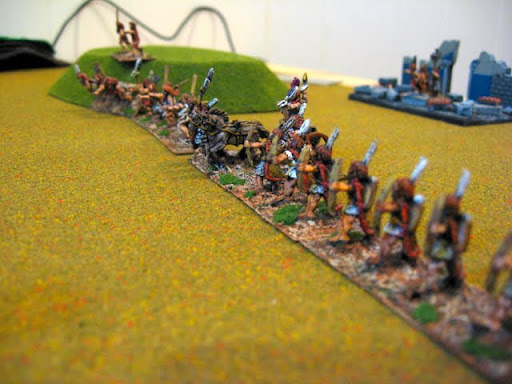 The Archon of Souvlakia was continually hampered by low pips and it took forever for him to get his beloved hoplites into a decent line. I grew restless and decided to attack his lightly defended flank with my horde of pantless killers. 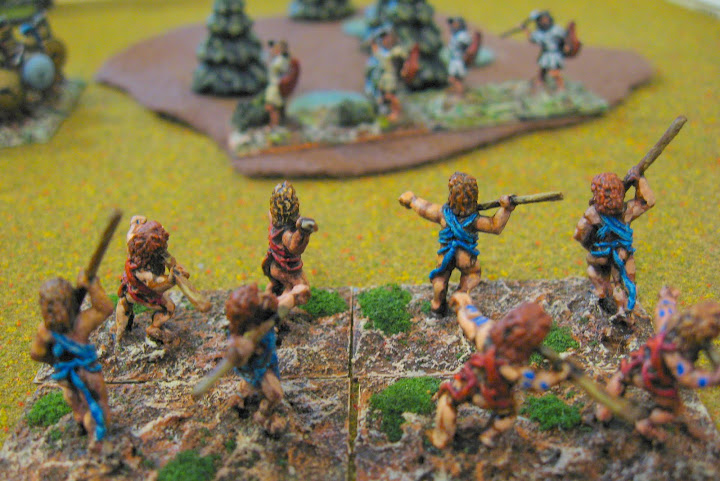 This attack was somewhat successful. I killed one of his stands before he was able to deploy his spear and disperse my psiloi. This ended with my psiloi fled and disorganized on the hill.
Only one stand remained to hold the flank. and they were not too confident. 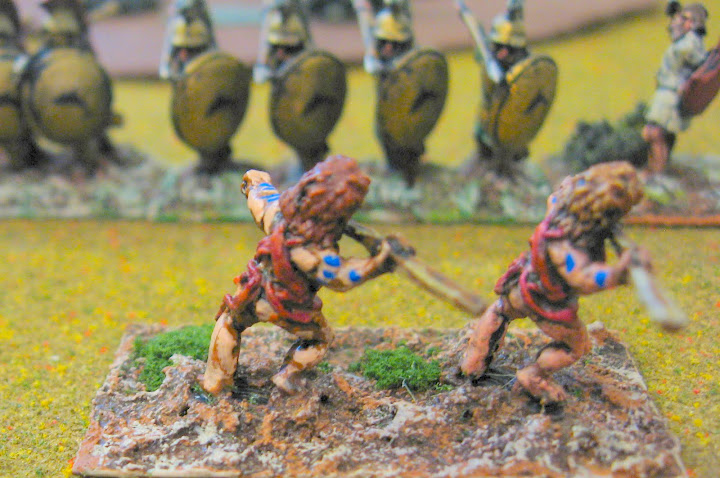 "C'mon we got them on the run!"
Feeling luckier (or was it desperation?) I threw my warband at his spear line. 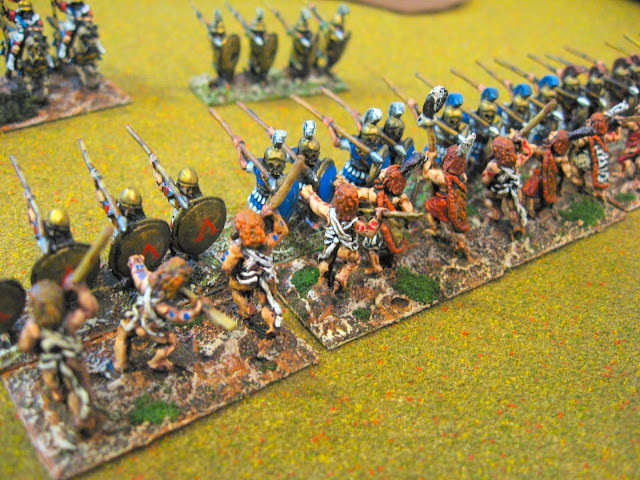 Results were one stand lost, one recoiled and one stand walloping those uppity Lakedaemonians on the left side of the picture. The observant of you have noticed that the stands of Libyans are at least a couple cm's smaller in the frontage than the Greeks. Alas, I used some sketchy bases that I didn't measure before using. Don't let this happen to you citizen! Now I need to rebase or at least just glue the existing bases onto the correct frontages.
For the next few turns we fought indecisive scraps. Until he killed my second warband unit. Soon we stood 3-2.
Desperate my last warband unit swung onto his flank forcing him to face me.
Warband vs Spear. I just have to beat him... 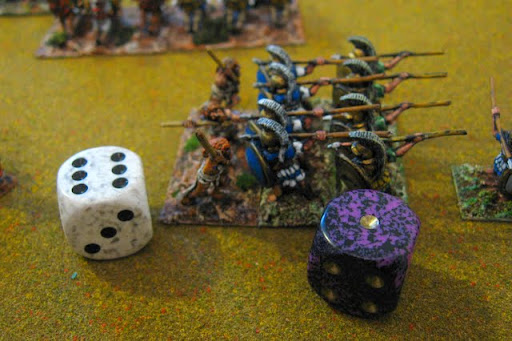 And I did.
My naked guys with pointed sticks beat up his fancy pants hoplites with their mighty bronze shields, multi colored linen armour and big plumes. Hah! This is what I love about DBA. It doesn't drift off into some equipment nerds statistical cluster-funk about spears that are 10cm's longer getting a +1 on the attack dice in relation to the armour co-efficient of the attacking unit divided by the distance traveled to arrive at the proper impetuous impact matrix. It just stuffs it all into a sausage and calls it 'Spears vs Warband'. (Which I understand is the very reason why some people hate this game).
_________________________________
To quote one of my favourite cartoons of the '90's
'You don't need pants for the victory dance'.
http://www.youtube.com/watch?v=5dEB_sztjaA&NR=1 (if you didn't know or forgot.)
__________________________________
Well, apparently somebody (who was not me) remembered the rules and reminded me that only one stand died. Gah. At this point I stopped the game to make another pot of French Press Dark Roast. We were now 3-3. Tension was high and we were out of pineapple juice as well.
I returned to the game to resolve the melee and found... 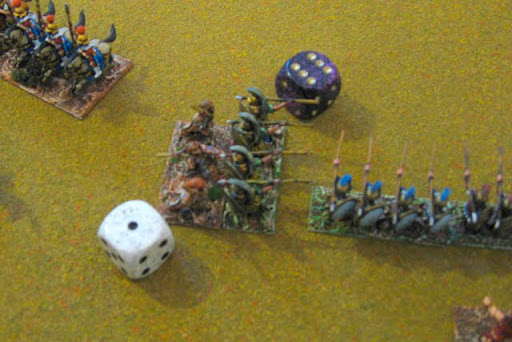 ...revenge was indeed served cold, with a side of 'ha ha ha ha'.
And that was game.
There was much celebration on the Greek side. 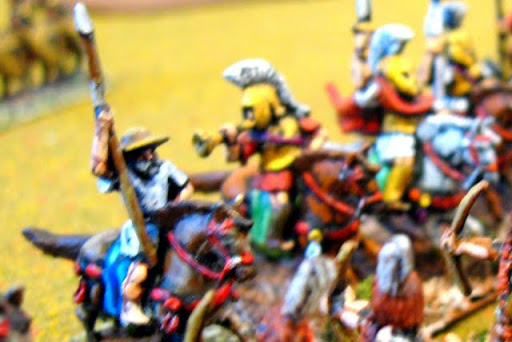 "Buddy, point that thing someplace else, will ya?"
Later Hoplite Greece II/5b over Early Libyan I/7b 4-3
Army Notes
The Early Libyans are Old Glory 15's. A few years back we had smashing contest here in Magna Calgaria called King of the Hoggar Massif. I put together about 6 army packs and we had a great time with Libyan on Libyan violence. My army was composed of the left overs, which is why it's a rebel alliance of Temehu. Weshwesh and Tenehu.
I really like this army, but I won't go so far as to say it's essential to your collection. You may not be wily, brave and masochistic enough to handle these guys. (wink)
One awesome occasion I actually beat Mike J's New Kingdom Egyptians with a headlong banzai charge in the open. Things like that don't happen all that often.
The Hoplites are from Minifigs through GFI in the States. I embarked on a full-on morph project and can field any Hoplite army with the exception of the Thessalians. Still need more LH and Cav elements. The Minifigs Greek and Persian Wars line is getting pretty long in the tooth and has some missing or indifferently realized figures. That said, they're the some of the best hoplites around and I like my Minifigs. The shields are the right size (eg: BIG) and poses are very business-like. I want uniformity and bloodymindedness from my hoppies. YMMV.
The camps were constructed by Pattus Magnus, maker of camps to the stars (and me.) Masterful stuff. They will be available for sale in kit form soon.
During the battle we listened to Holst: 'The Planets', They Might Be Giants 'Here Comes Science' and some goofy '80's compilation. Two pots of rather strong coffee, several cups of pineapple juice and a small stack of peanut butter toast was consumed.
-Sean
Posted by Teenage Visigoth at 17:51 2 comments:

Back from the dead.

I'm sure you thought I was gone.
Computer issues have as of late forced a certain level of 'inactivity'.
But Teenage Visigoth is back online with more DBA related ramblings. I'll be back with some recap and reflections of the event at FallCon (only how many months late?).
Then as I have resolved the somewhat elementary issues of camera/computer interfaces I will be indulging in that most indulgent activity of miniature gamer fun, pictures of all my armies.
First a teaser and prophecy. Pictured above is the Lord of Clan Saketumi from my Early Samurai III/54. This is a Bow General. I like him. He's vapourized many Emishii light horse barbarians and been utterly hammered by Blade bushi. I think the army itself is 5 wins - 7 losses.
I'll document more when I finish posting pictures the rest of the force.
There has been some good discussion of the interplay of the Blade vs Bow option on Fanaticus
(http://www.fanaticus.org/discussion/showthread.php?t=9078) in the Early Samurai army. I really enjoy this army. It's fast with 3-4 Cavalry elements and the 5 Auxilia. The Bow or the Blade debate however makes the army either bound for honour or a bulk supplier of severed heads.
Prophecy wise: come FallCon 2010, my intent is to run 'Samurai Night Fever II: The Wrath of the Khans'. Yep.
Mongols. Samurai. Koreans. Chinese.
Party time on Hakata Beach!
And yes, Clan Saketumi is fictional. Watch Austin Powers for the etymology of the name.
-Sean
Posted by Teenage Visigoth at 11:30 2 comments: