Game the First: 'Once Upon a Time in Caermarthen'.
Saints are an  interesting component in wargaming, particularly in the Dark Ages or the Post-Antiquity Period of much Disorganization. Miracles which flowed quickly in the shoddily documented period seem to dry up as more books are written. Go figure...
Patrick particularly is a cool saint. Preacher to the Irish or Slave trading Tax dodger ? Bit of both perhaps. But the Age of Saints and Scholars gloss overlooks the fact the Irish or Scotti for you Classically inclined were a bunch of warlike, sketchy raiding sorts who delighted in sailing about the Isles in little boats made of cow parts and setting two-bit juntas on rocky hill tops.
Over looked is the Irish colonization period in Wales. Over looked by all but the Welsh (world's longest memories evar..) that is. But the southern tip of Wales was over-run with antagonistic Gaels, tipping off an epic migration story that would culminate over the centuries with the creation of Catherine Zeta-Jones.
But the comely charms of Ms. Z-J aside, the period does offer a rich context for staging little battles with toy soldiers.  Don and I had go to that fine St. Patrick's Day. Two games in fact. Firstly Don took to the field with my celebrated* Welsh defending the field against my upstart Irish Raiders.
Don deployed in large double ranked horde with his Cv general off to side. I split my force into three little divisions. Two equal column of Ax with Ps support, one to compose the centre and other to make an end run around the horde. I had three other stands (below) facing Don's psiloi on the other flank. Mostly as a screening force, but hey when things go south, it's always nice to have a few guys in reserve.
I kept the mighty Chief unattached for use as a linebacker should warbands burst through my lines.
Don had set a tight, messy board with lots of junk, particularly a large hill dominating the centre board. I wasn't having any of that and forced him by series of feints and recoils to come off his little mountain.
Meanwhile on the other flank, my attempts to dislodge his archers off the hillside was repulsed.


Finally the crunch came. His line in danger of being flanked committed hastily to the fray. In a series of short exchanges (two turns tops) the game ended, 4-2 for the Irish, the game winner dealt by the chariot chief catching a unit of Welsh exposed in the open.

A good game and long awaited victory for me (it has been a dry spell). Oh, what's that I hear you say? 'Beating monotype Warband with Auxilia is no challenge, a cheap victory.' Oh perhaps so Mr Smarty kilts, but I'm TAKING THIS WIN. Dammit.

As it was Don made a most uncharacteristic deployment mistake. His hill-top holding strategy might have worked with plodding Middle Saxons or Normans with their horsies of death, but he essentially surrendered the initiative to the wily Scots-Irish whose mobility was unhampered in the rough.  I believe the great Irish sage Sun-Tzu said something about turning your enemies strength into their weakness... who am I to argue with Irish sages?

* celebrated by me for making Vikings cry.


Game the Second: Once Upon a Time in Mercia

If Irish vs Welsh is a more obscure match of Dark Age Britain, the Saxons vs the Welsh ranks as the classic.
First a digression: I had friends when I was younger (despite rumours to the contrary) who were transplanted Cambrians. Wonderful folks. My bud's Grandpa Roberts in particular was an interesting fellow. Educated, passionate union-man, die hard leftist and amateur historian (pretty much a Welsh stereotype or archetype...your call). I think he was my fantasy Grandparent, my own prairie bred Grandparents being a little dull and concerned with bake sales and getting good deals on tires. Anyhow, Grandpa R. was quite convinced everything went to shit when the Saxons showed up in Britannia. Saxon. He'd spit the word out like a swear. Anything went to crap and it was the fault of the Saxons...Legend has it he called then Prime Minister of Canada Pierre Trudeau a 'Saxon' which opens all sort of interesting points for discussion (throw in Dr. Who and we can go  a whole other direction). But Grandpa's R's cheerful and endearing ethocentrism and quirky biases aside, it did get me interested in a on-going learning project of what made the Welsh Welsh and Saxons Sax?


Don too is currently having a moments of scholarly obsession with the Welsh right now, brought on by a family inquiry.  As such was pretty happy to take the Welsh for a second spin, this time against my Early Saxons.

Now I like the Early Saxons. Despite their wanker status and the poo poo they get from the DBA cognoscenti they rock. Truly like the Mongols they are DBA wimps, but historical badasses. With 11 units of warband, it's not about how you win, it's how you die. Like I say to beginning DBA players, 'If winning is all that matters to you, you are not worthy of playing a warband army'.

So enough fortune cookie wisdom... on with the game. I set the board and made it wide open. Face it, the Early Saxons are a slow mob and unlikely to get anyplace fast. So a clear, classic hazelled field it was.
Firstly things went squiffy for the Saxons...the pair of Welsh psiloi on the far flank overthrew the lone Saxon psiloi and the warband supporting them... Bleah. But we all know you don't win games on the flank. You must crush their puny battle line. And other flank was in great shape, the Welsh general was ZOC'ed by toeholding warband on the rough hill and my line was in good order. 6 for pips? Why thank you Wotan, that was swell! The Saxons slammed into the Welsh line and despite some uneven match-ups there were no kills, but the Welsh line was in rough shape.

The disarray worked in favour of the Welsh. It made them tougher. They took their power-ups and leveled up to 10th Level Saxon Slayers...armed with +3 Spears of Skewering they flattened the Saxon centre. I don't even remember what the final tally was, I think I repressed it. The survivors didn't stop running till they reached Kent...it was the sort of battle that would decide a kingdom.
Two great battles, Don and I had a blast.

More Pix? OK then! Here's some from the other games...

Thanks for reading! -TV

Some of you may know my other 'geek hat' is that of a principal in a very small but beautiful miniature company, Trey Corbies.

We stealthed into the market a few years ago with the first and finest line of Pre-Christian Irish Warrior Women.

Now we are boldly moving into the another unexplored niche, The Garamante of ancient North Africa. 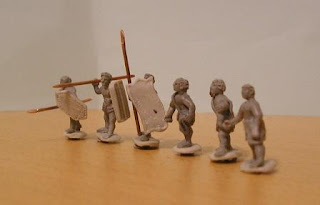 Here's a quick look at the greens. Present are the great shields these warriors used as they harried, raided and traded with the Hellenistic Kingdoms and the upstart Roman Republic.

DBA nerds will also know these guys can be used in the smallest, quickest to build DBA army in the books. We'll be selling an army pack at a low price.

I'll be building an army as well and cross-posting my results on the Corbies site and here.

-TV
Posted by Teenage Visigoth at 14:20 No comments: