I really hope someone throws together a Hun army for the event.

The Huns get no respect.
Despite the unfortunate ranking on the CCF_NAGS 'Top Dogs and Wankers' lists, the Hun army is some pretty cool stuff.
By fielding the 'Other' list you can take nothing but light horse. Your DBA needs be good to win consistently with that style of fighting. But consider that you can turn your opponent into in emotional basket case if you throw flanking runs, faked assaults and crazy multi-pip column runs at him.
The 'Attila's Army' (always makes me think of Elvis Costello's 'Oliver's Army) give you some whack-job Gepids to do the charge first crazy Warband and Knights stuff. Sweetness. Take that Roman Patrician goons!
Most DBA players I know are incessant info-vores so I give you inspirational material to get into your own personal 'Attila Zone'.
Firstly: 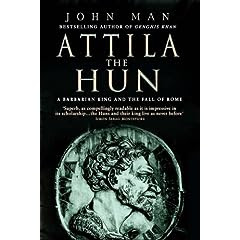 http://www.amazon.co.uk/Attila-Hun-Barbarian-King-Fall/dp/0553816586
Mixed reviews for sure, but a good read IMHO. Some interesting ideas about mounted archery as well. Man also gives a pretty good description of the End of the Empire.
If you're cheap, lazy or prefer your history laden with profanities, I present:
http://www.badassoftheweek.com/attila.html
Go Huns!

If you prefer your history Pythonized,
http://www.youtube.com/watch?v=X-x6FBuF4JM
Now if there were figure manufacturers with any chutzpa we'd have a complete line of Mr. Attila the Hun, Mrs. Hun, Robin and Jenny Hun figures.
Cheers,
-Sean
Posted by Teenage Visigoth at 11:58 No comments:

All the armies are 15mm based on the standard 40mm frontage.
Yeah, there are lots of hot figures in other scales...but this is how it rolls.
A little visual inspiration of Vandalism for you. I find the inclusion of the Moors interesting.
It makes me think of Blazing Saddles when Sheriff Bart pipes up to the Klansmen 'Hey, where all the white women at?'
I love crappy old paintings like this.
Now anyone who comes to the tourney with an African Vandal army earns my serious respect. In fact if you painted the thing yourself I just might give you bonus points right there.
-Sean
Posted by Teenage Visigoth at 11:51 2 comments:

Burn Rome in a day!

Hey!
Thanks for taking a look at this event. It's going to be a fun time. 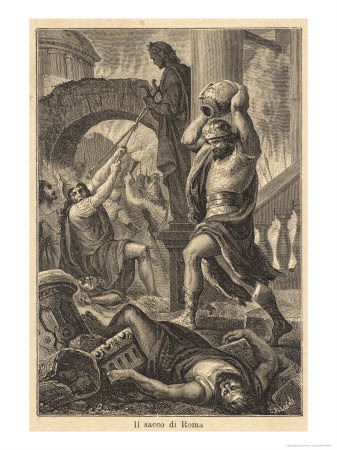 (Remember it's not cool to take other peoples stuff, this is just pretend!)
Prepare for an evening of looting and destruction at the End of the World.
Here's the plain facts for those of you who like such things.
I Was a Teenage Visigoth will run at Fallcon, here in Calgary, Alberta, Canada.
See http://www.fallcon.com/for a more specific location and registration details.
The event starts Friday night, September 18th at 7 pm.
The rules used are De Bellis Antiquitatus aka DBA version 2.2
Armies that are eligible are;
II/83 a Patrician Roman West
II/66 Early Vandal
II/67 b Early Ostrogoth (others)
II/71 Gepid
II/72 b, c, d Early Franks, Alamanni, Suevi
II/73 Early Saxons
II/80 a + d Hunnic
II/82 a Later Visigothic
II/83 b Patrician Roman East
II/84 African Vandal
III/2 Early Lombard
I've also handwaved in two other armies in recognition of their role in the end of the Western Empire,
II/70 a Burgundian
II/58 Alan
You are encouraged to bring your own army from the list. There will be some loaners on hand, but they will be randomly assigned so you might get stuck with the Early Saxons! (more on them guys later).
That's all you need to know for now. I'll post terrain restrictions, scoring and other stuff as we go.
In the tradition of the first Friday night games at Fallcon, 'I Was a Teenage Visigoth' is a relaxed, novice friendly tournament. The Calgary Camp Followers and our associates host a few De Bellis Antiquitatis events over the weekend.
The idea with the Friday night game is to provide a fun, theme based warm-up. Last year I ran 'Samurai Night Fever' which was quite enjoyable and well attended.
This year by focusing on the FALL OF ROME we can have pleasant evening focusing on treachery, blood lust and looting.
Email me at teenagevisigoth@gmail.com if you have any questions.
Cheers,
-Sean
Posted by Teenage Visigoth at 12:06 1 comment: