Songs for the Barricades!

Aside from the DBA, I do muddy my fingers in other games and periods...
For example:
The Charming and Very Evil Mark I. is continually trying to entice me into Napoleonics. Particularly the Pennisular Campaign. I have almost buckled. Something about Spain.
But my Spanish thing right now is the Civil War of '36-'39. (I got over the Second Punic War fever back in '07, still working through the Reconquista and Visigothic Spain.)
There is interest and momentum in our circle of comrades right now for some SCW action.
Don Don, another Calgary Camp Follower with some Iberian fever instigated the mess and it revealed a great deal of percolating interest in many of our group.
One of our prime movers Neldoreth has just done up some Anarchists
http://www.hourofwolves.org/?view=armies&which=scw&pic=4
Those of you who are familiar with his work should not be surprised. Those who are not should stop wasting their time on this blog until they have gone through his most masterful site top to bottom...Good, back now?
My contribution will be some scruffy Irish Internationlists. Maybe some Republican Regulars as well. (There is no truth to the rumour that I used to claim to have ancestors who fought with the Irish volunteers and the Mac-Paps in order to get free pints from sympathetic ears)
The whole period is full of myths, stories and legends that somehow transcend the truly violent period it was. Like many 'young punks' I was introduced to the period and particularly the Republican cause by the Clash's 'Spanish Bombs' from the London Calling LP. It suddenly made my upcoming book report of 'For Whom the Bell Tolls' make a lot more sense. I really haven't looked back.
I was charged to find these guys from Spain keeping the faith. Play loud. ;)
http://www.youtube.com/watch?v=tL9vAqQC1ys&feature=related
Those of who do not share the expressions of solidarity and resistance displayed in such a song with such vigor, I present a fascist baby-soldier paper doll for you. 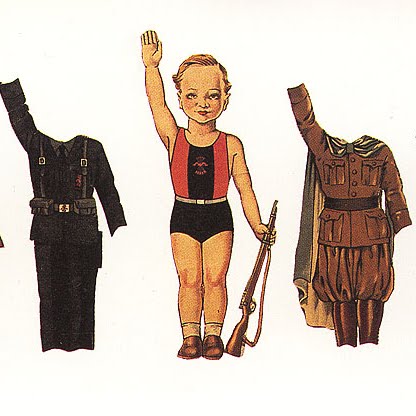 Have fun at the barricade of your choice!
Next up some battle reports, painting and why Charlemagne was such a tool.
-Sean
Posted by Teenage Visigoth at 10:59